Years ago I spent an afternoon in a small town called Sigsig, about 60 km from Cuenca, in Ecuador. You could read a little about that experience in my blog post here. At that time of writing, I was on the road and didn’t have the chance to upload this photo, which to me perfectly captured the mood of that afternoon: a lady in a white bowler hat, a little shop with a signage that reminded me of of the name of a friend who was 10,000 miles away, and the slanted afternoon sun. 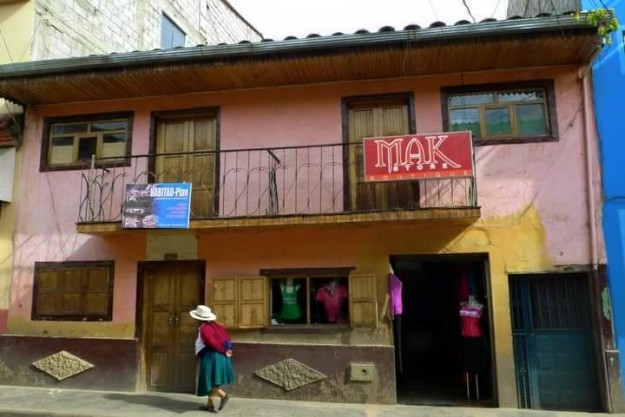 Funny isn’t it, that our memories can be carved in a particular standstill of a moment even though what we had experienced was really much more fluid.

Last year, I decided to take up oil painting. That scene has now been transported on to canvas in July! 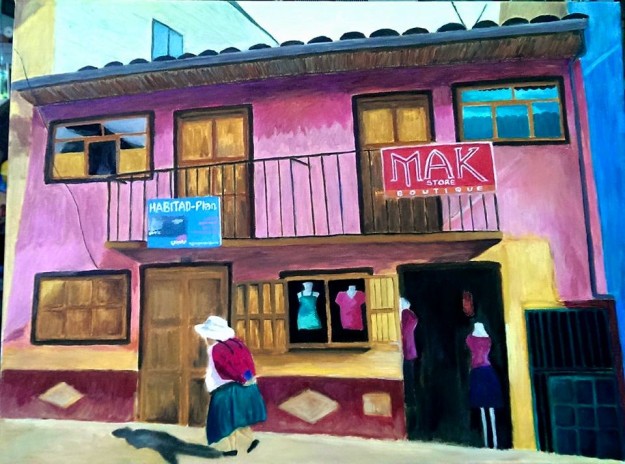 WordPress.com is excited to announce our newest offering: a course just for beginning bloggers where you’ll learn everything you need to know about blogging from the most trusted experts in the industry. We have helped millions of blogs get up and running, we know what works, and we want you to to know everything we know. This course provides all the fundamental skills and inspiration you need to get your blog started, an interactive community forum, and content updated annually.

One of my first book orders of the year arrived today. Started with the editor’s foreword and can’t wait to read Muir’s essays.

I wonder if it is the chemicals in the paper or someone accidentally pouring a bottle of perfume (also chemicals) into the book producing process, or am I simply imagining the whiff of lavender as I leaf through the pages. I sniff again. And again. And again. The scent lingers. I’m literally burying my nose in a book.

I don’t read enough, much less read enough new books to be able to write a list of ‘best books of 2015’.  I did read some lovely books last year that are worth mentioning and maybe you may like them as well!

This has to be the best book I have ever read! It is an engaging, unconventional book about the history of the human experience and philosophies woven with semi-biographical narratives of contemporary women in France (read the book for the British author’s explanation of his choice of the  female subject and why French). If this is not enough to pique your interest, here’s a sample of the contents table:

The book was first published in 1994/1995, and I only discovered it last year while casually browsing in an indie book shop in Singapore. Moral of the story (and potential chapter titles, perhaps?):

A collection of short stories, and winner of the Singapore Literature Prize for Fiction 2014. The stories, while based in familiar Singapore setting, explore emotions that are universal and yet, uncomfortable to deal with. I can’t wait to read more of her works.

Another collection of short stories, this set contains eastern folklores with a modern twists. The first thing that attracted me was the exquisite book cover – yet another reason to browse book stalls at artists’ fair! Some stories are better than others.

4. Sapiens – a brief history of humankind by Yuval Noah Harari

Another history book, you say! But this proved to be such an engrossing read that I started over Christmas and finished it while on a flight back from Australia on new year’s day (I am a slow reader, by the way). Written by a professor of the Hebrew University of Jerusalem (who happens to be only 39 years old?!), this book is an engaging take on the history on homo sapiens. There are some attention grabbing titles such as “The Agricultural Revolution – The Biggest Fraud in History” and certain sweeping statements at portions of the book. But there is no doubt that the book will make one question some of the assumptions that we make – and take for granted – about the history of our species. The book would have been more comprehensive if it had given some discussion about the development of art, literature and music in mankind’s history, even if these developments had never bore the label ‘revolution’.

Written by reknown mainland Chinese writer Yu Hua who is famed for his fictional novels Brothers and Living, with the latter made into an acclaimed film by director Zhang Yimou. China in Ten Words  on the other hand is anything but fiction: part memoir, part observation of China, through Yu Hua’s eyes you get a personal glimpse of China’s Cultural Revolution and its uneven development that had led to the market-based Chinese economy of today. Each essay explores subject matter represented by the words People, Leader, Reading, Writing, Lu Xun, Revolution, Disparity, Grassroots, Copycat, and Bamboozle. The book is all the more remarkable because it deals with topics such as the Tiananmen demonstrations and June Fourth, topics that are generally considered to be taboo in China – it has been reported that Yu Hua did not even bother to get the book past PRC censors. Although Yu Hua wrote the book in Chinese, the book was actually first published in French, and then in English with the first Chinese edition published in Taiwan.

The book in English – though tame in comparison to the language it was originally written in (at least base on my quick read thus far of one chapter in Chinese) – is humorous, candid and a wry take of each of the 10 words, as seen through Yu Hua’s childhood against the backdrop of the Cultural Revolution, with connecting threads to present-day China. Highly recommended.

In 2013, when Sebastiao Salgado’s ‘Genesis’ photo exhibition was premiered in the Natural History Museum in London, I had the urge to fly into London just to see the exhibition. Such was the draw of a photographer who seemed to me both adventurer and artist, a winning combination of a dream life. It would have been extravagant for me to make that trip to London. Fortunately a year later, the ‘Genesis’ exhibition  travelled to Singapore and I got to see them in the National Museum.

The 2014 film ‘The Salt of the Earth’ is about Salgado and the extraordinary images that he has captured throughout 40 years. Some of the most stunning and seemingly unbelievable images are that of the Serra Pelada goldmines of Brazil where swarms of people climb up ladders in ant like fashion – these photographs froze in time the height and madness of the gold rush. In the photographer’s own words, “when I reached the edge of that enormous hole, in a split second I saw unfolding before me the history of mankind. The building of the pyramids, the Tower of Babel, the mines of King Solomon”.

Salgado built his career and name as a social photographer: his photos of war, grief, poverty and suffering brought the world’s attention to these plights. These are not photographs that are easy to see. What goes through a person’s mind when thrusted upon with the sight of cholera, corpses and genocide in 1980s-90s Africa? A photographer isn’t just an image-maker, he or she is also a story teller, a quality which Salgado also demonstrated through his compassionate narration in the film. And yet the photographer’s job requires the unflinching steely clicks of the camera to tell the story as it is.

The ‘Genesis’ series remain my favourite: these photographs take us to the Galapagos islands (once my dream islands!), the paw of a Galapagos iguana that reminds me of a sequined ladies’ glove, the human-like penguin colonies in the Antarctic, the eye of a whale peeking out from her oceanic home, the depths of the Amazonian jungle with polyandry ladies of the Zo’e tribe and more. The photographs remind us of our pristine natural world. And in my case, sowing more (if that’s even possible) seeds of wanderlust.

I just watched this film today at a film festival and I highly recommend it!

See the similarities in the symbol on the Kyrgyzstan flag and the crown of the yurt?

Kyrgyzstan flag with Lenin Peak in the background.

Crown of a yurt

I want to live in a round / circular space like in a yurt.

I spent the whole afternoon strolling (and rolling!) on these golden meadows, with clear sight of snowy Lenin Peak.

What a glorious day to greedily bask in the sun before the temperatures drop drastically when the sun sets. 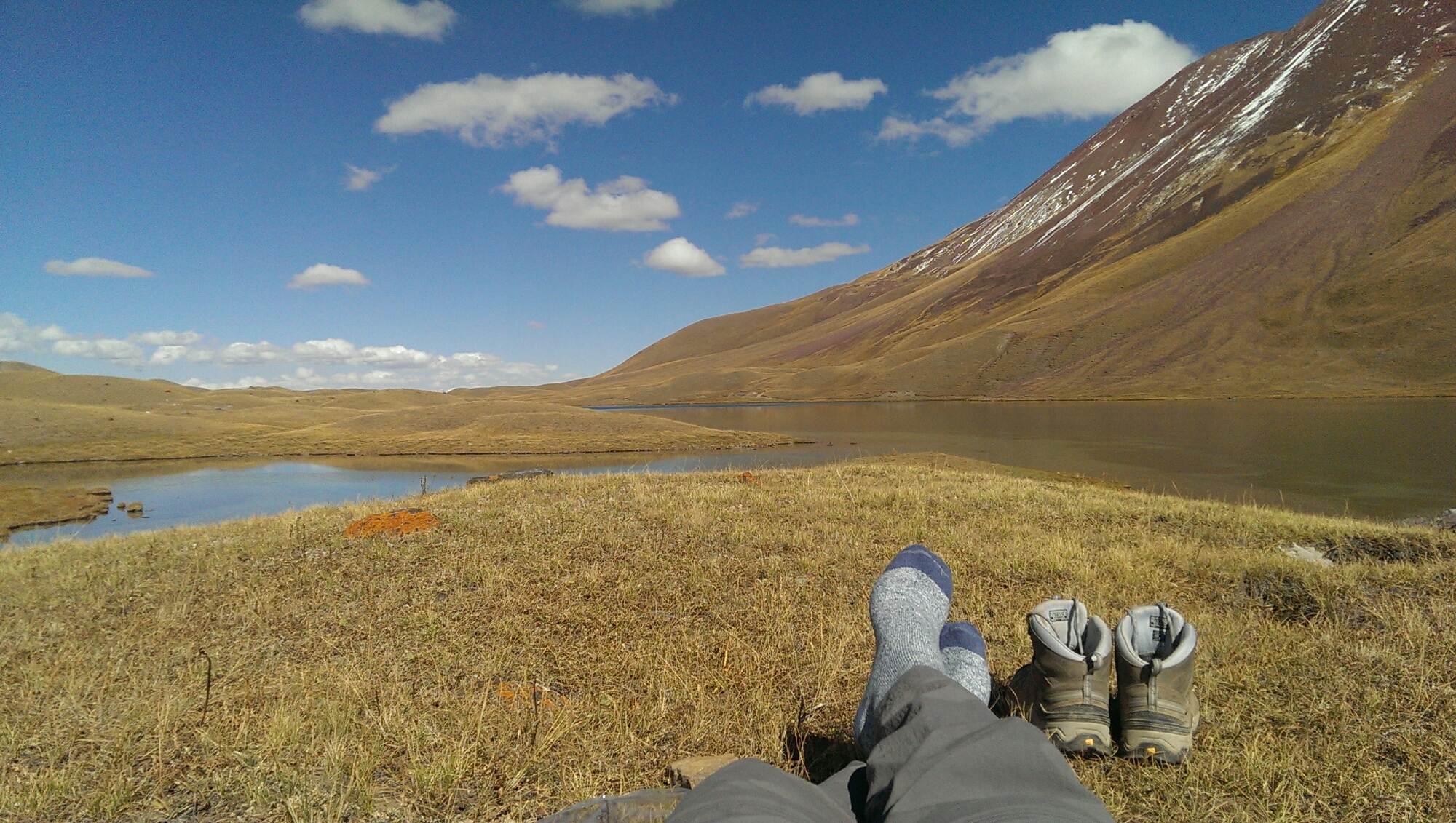 At lake Tolpur Kol, about 3500m above sea level. 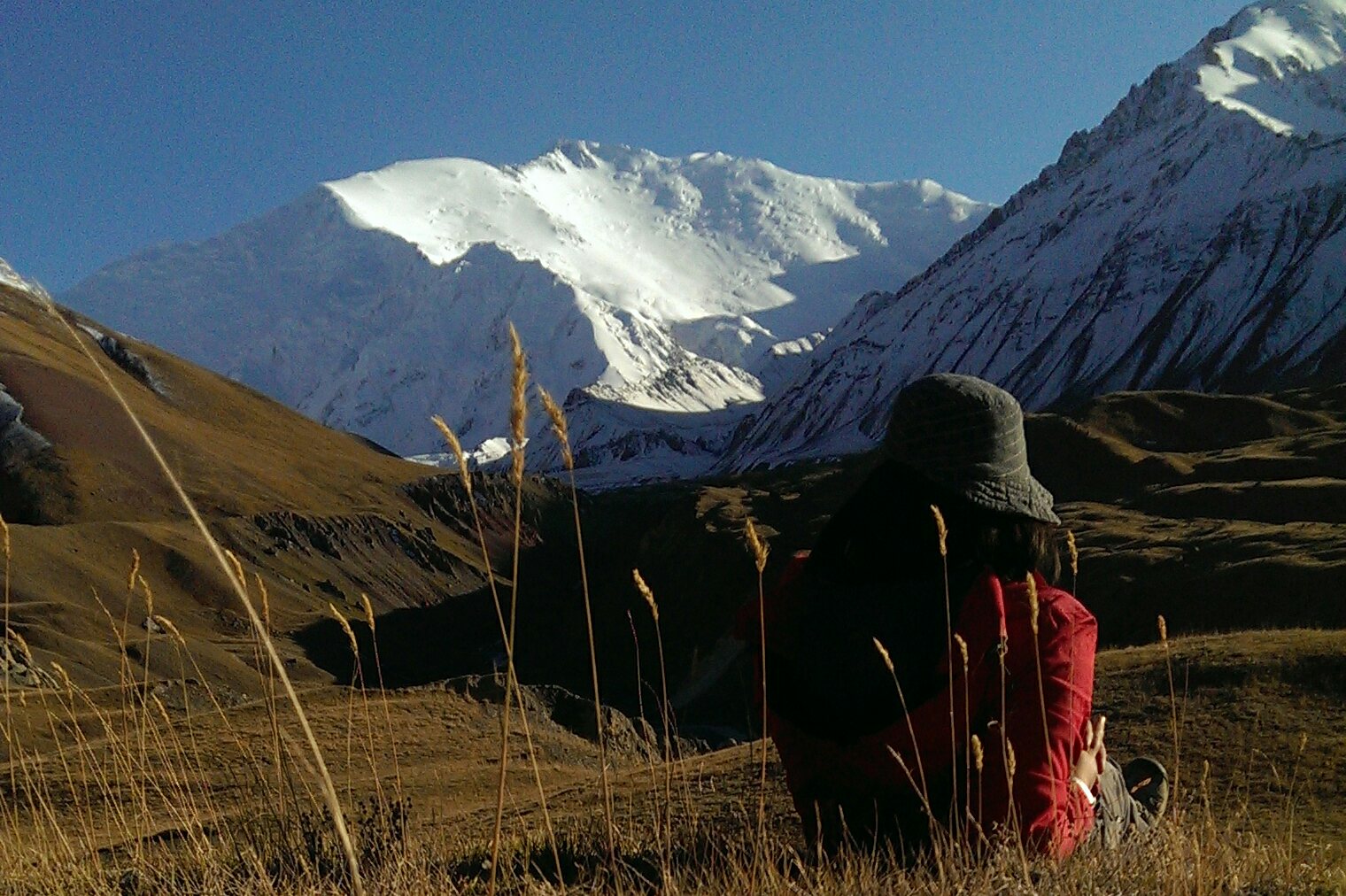 Looking at Lenin Peak, standing at 7134 meters tall, the highest peak of the Trans-Alay Range, the northern part of the Pamirs. At the borders of Kyrgyzstan and Tajikistan.

I love these shadows over the pastures as the sun sets.

After days of lush alpine scenery, I left Karakol for Bishkek. Originally I had intended to leave Bishkek as the last stop before I return to Almaty. Alas to catch a transfer to Arslanbob  I must go to the capital.

The mashrutka (minibus) from Karakol took a whopping 6 hours with a change of spare tire. Along the way the road meanders along a bit of the northern shore of lake Issyk-Kol. Issyk-Kol is 170km long and 70km across – so that’s probably about 8 times the size of Singapore. It’s the second largest alpine lake after Lago Titicaca of Peru and Bolivia.

After arranging for the shared taxi to Arslanbob  (which will be a gruelling 12 hours ride) tomorrow, I decided to check out the banya that’s across the hotel.

Like most public baths I have been to in other countries, this bath is a place for people to unwind and socialise. Despite the amusing exterior, I’d consider it a good bath place and it’s very clean.  Under the big domes are cold pools – the women section’s pool is gorgeous. Fresh out of the baking hot sauna, I walked to the pool ready to dunk in. After all, a few days ago I had been strengthened by kymis – the traditional fermented mare’s milk that bred centuries of fearless nomadic horsemen in the great steppes.

Alas, I lasted a mere five seconds in the cold water. 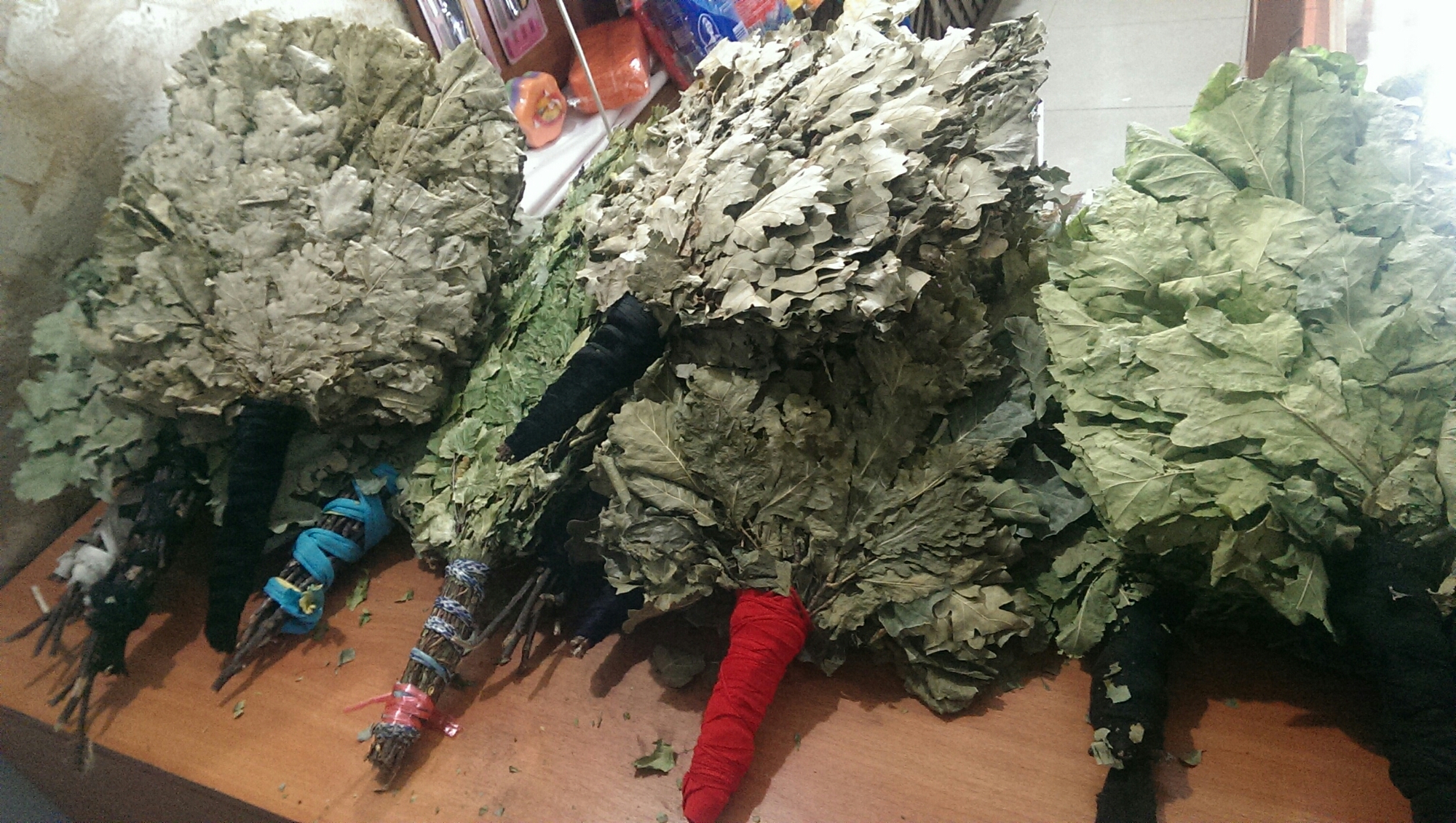 Optional are some twigs for self flogging.

Wall decor of the waiting area.

I paid a bit more for a massage and it was heavenly.

Just came down from the mountains after four days three nights.

It was a hard climb up to Ala-Kol lake and very steep climb up to the pass. Scary was the descent over snow-covered scree on a steep face. And camping in such cold conditions was excruciating. Note to self – next time, don’t visit later than August!

More of the hike later. Meanwhile here’s a photo of Ala-Kol, taken while my fingers were still nimble.

The livestock market apparently starts at midnight till midnoon. I was told there’s a hype in activity as it’s the season for various expenses (for example, school) and people are selling their livestock to raise money.

I
The market is packed with people and livestock.
This is just the horse section. 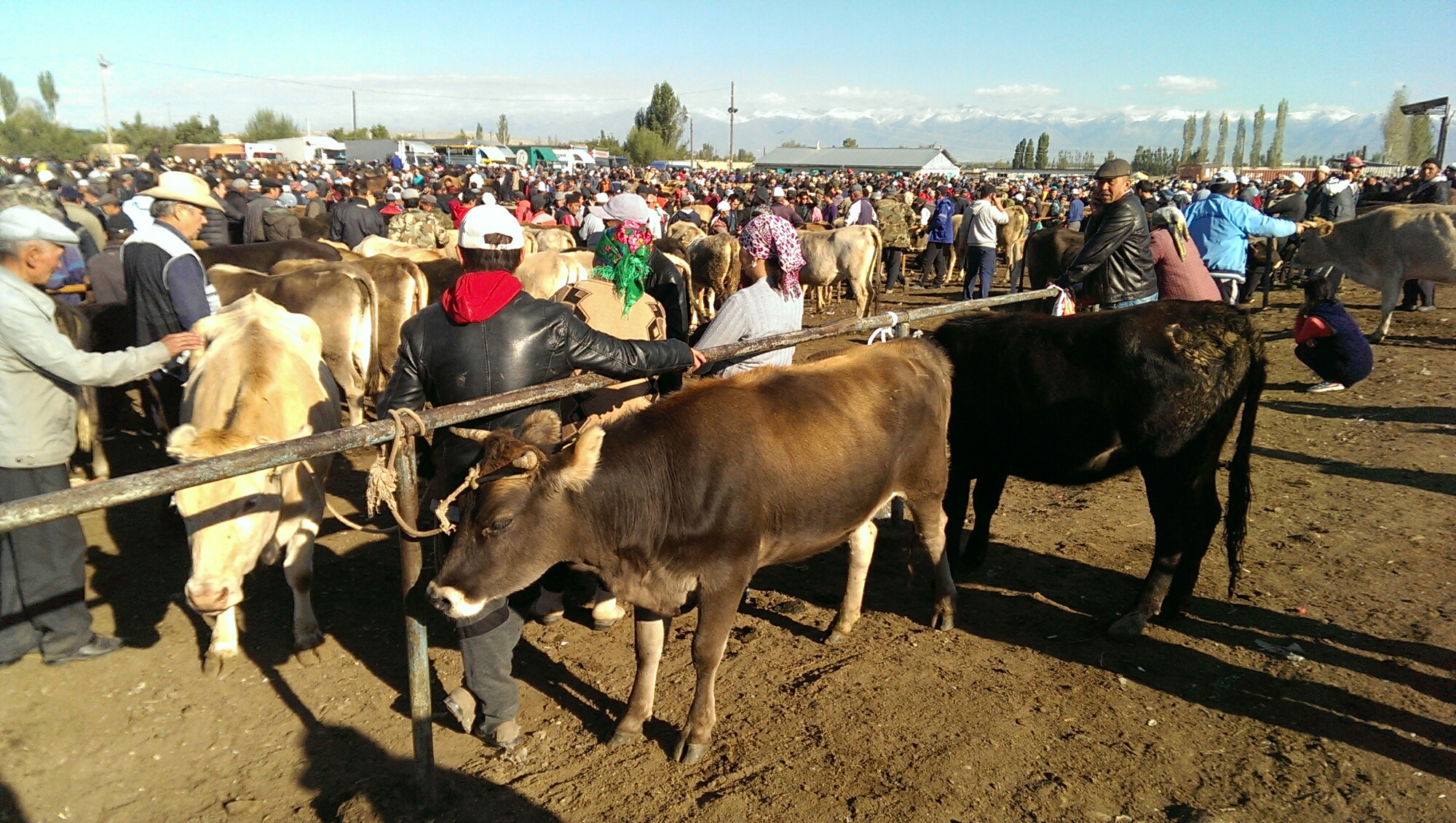 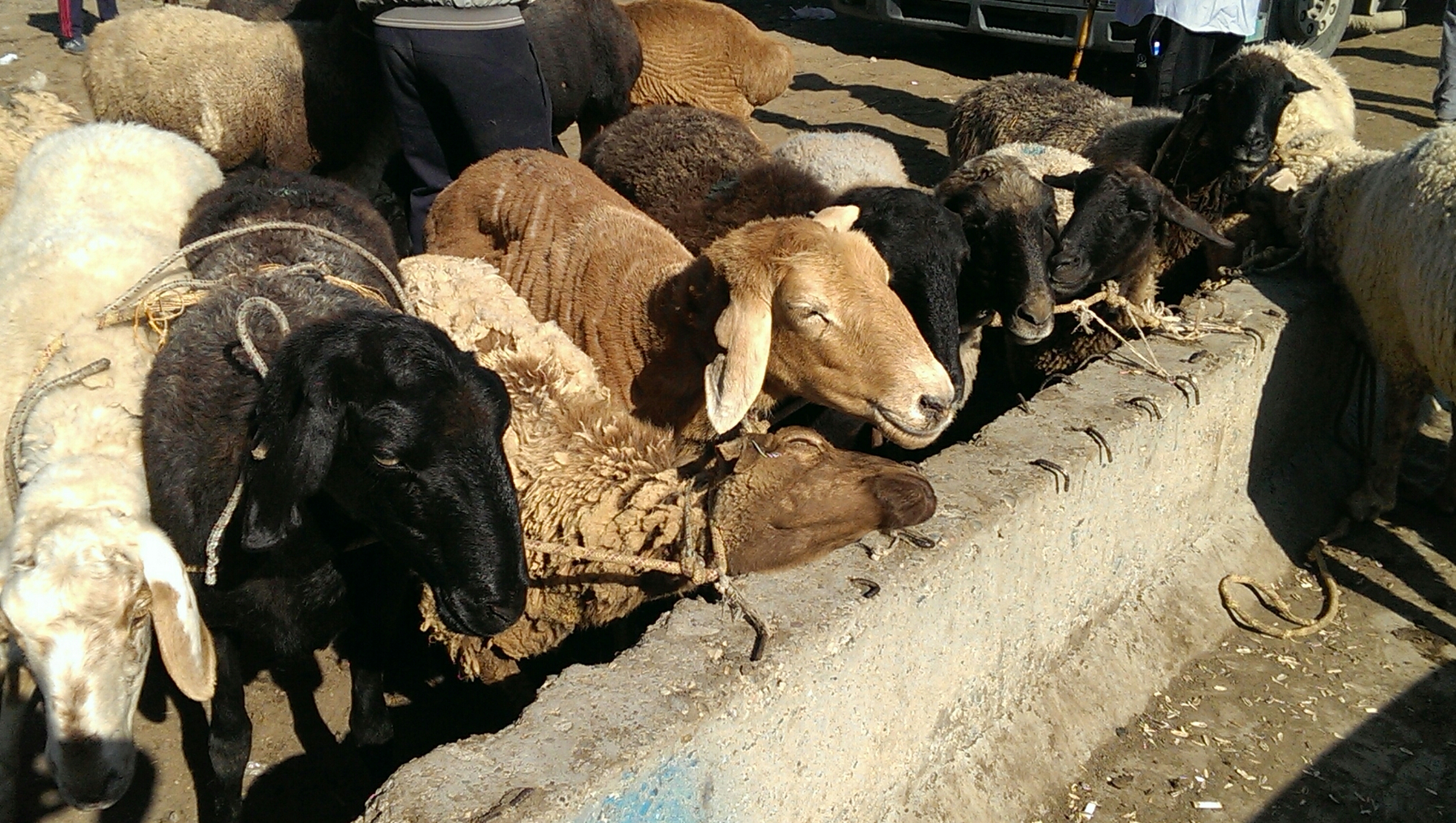 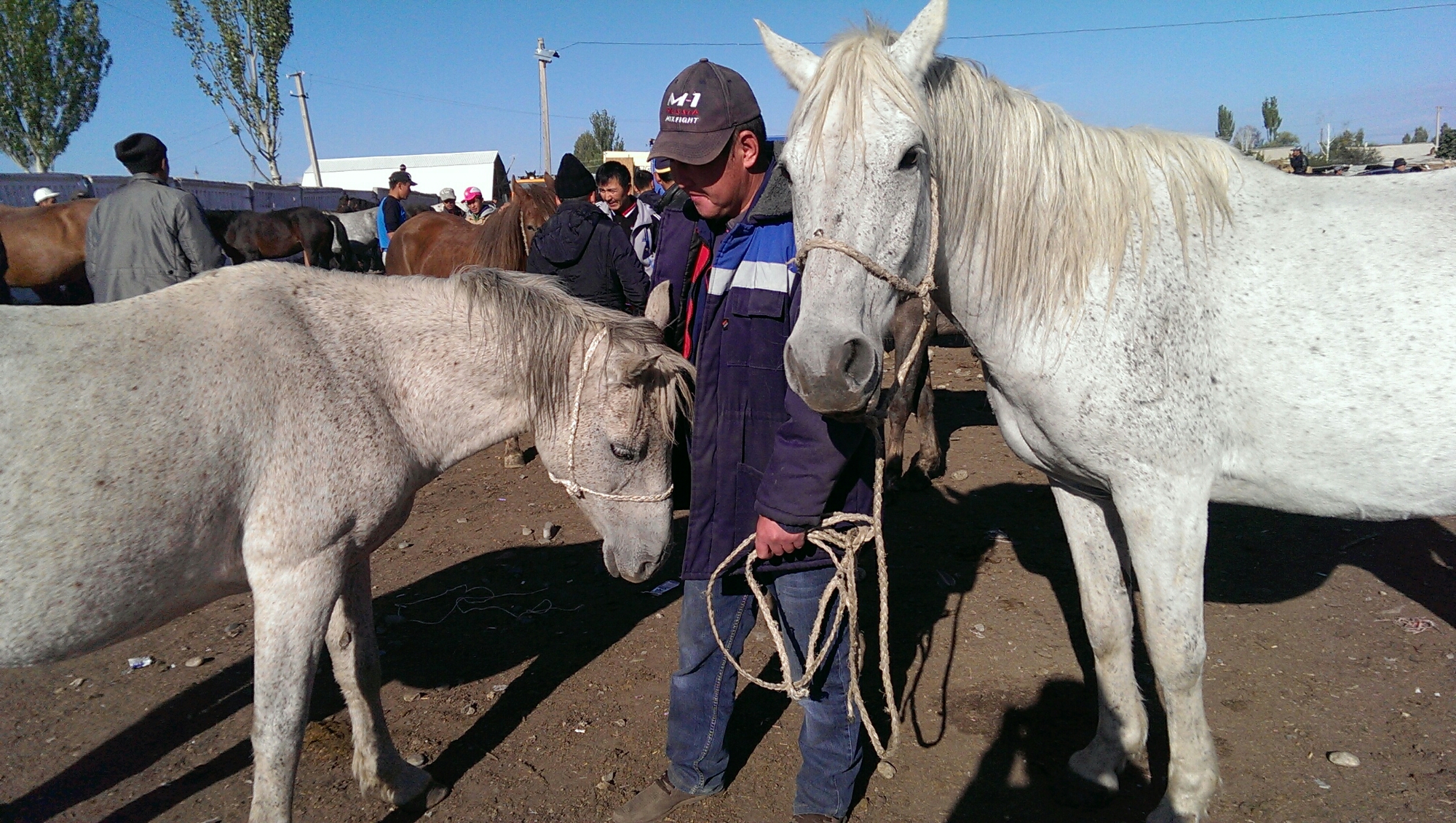 END_OF_DOCUMENT_TOKEN_TO_BE_REPLACED

Flew from Hong Kong to Almaty. The good weather reveals part of the magnificent Tien Shan – literally the ‘celestial mountains’.

Somewhere to the south-west of Urumqi and north of Korla, China. 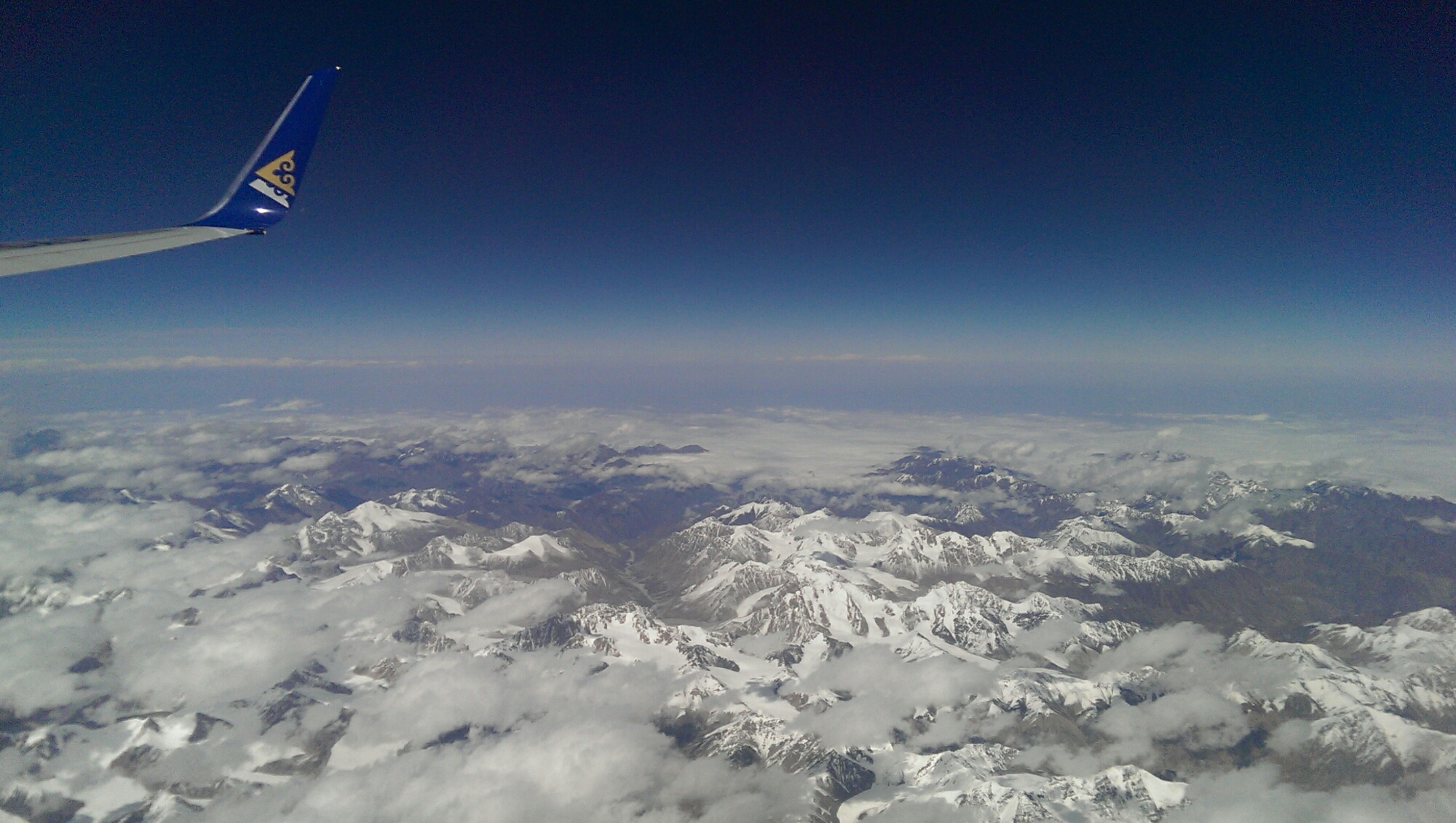 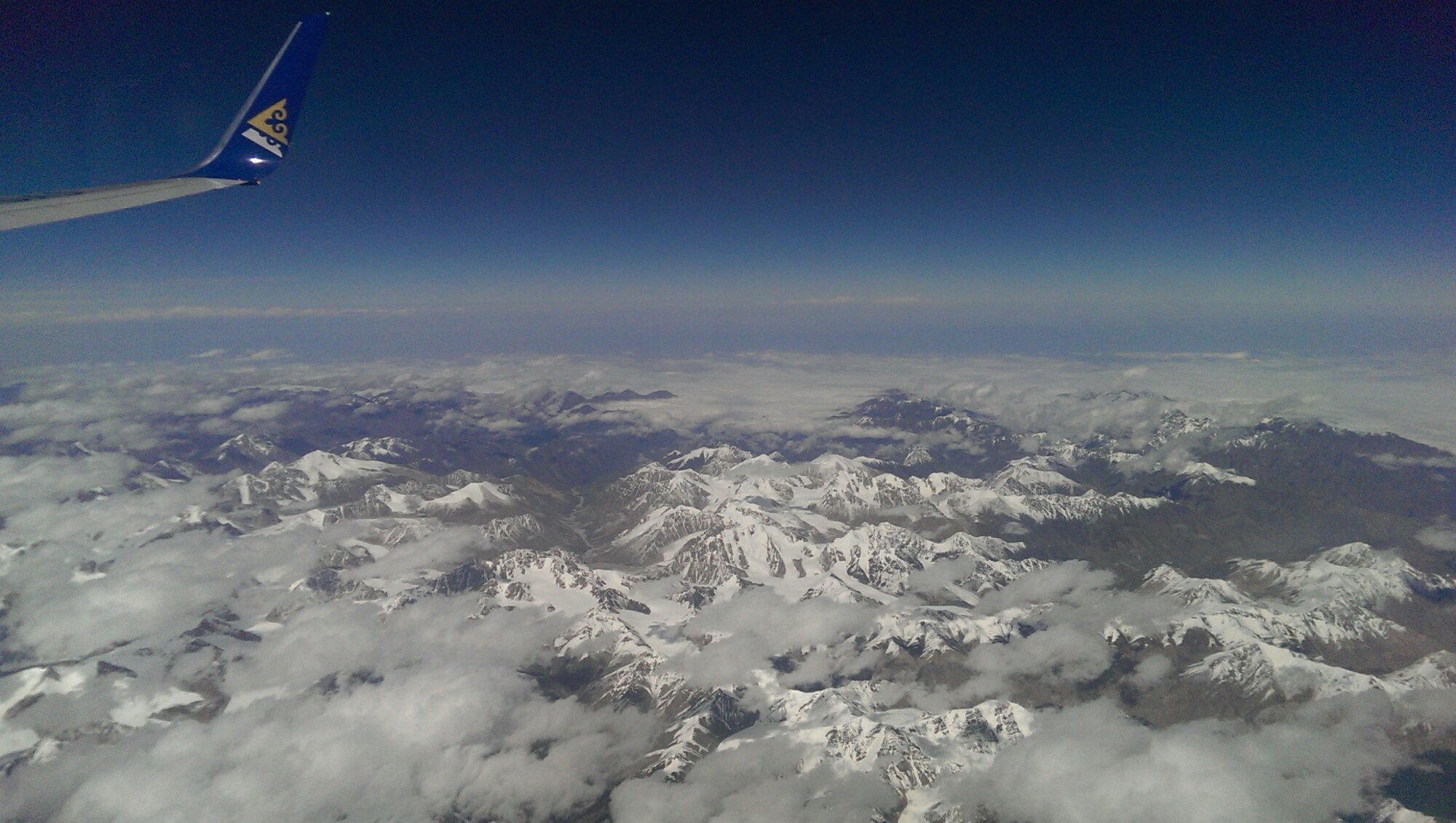